I’ve gone through life white-knuckled in the moments that left me behind.

I would love to take credit for this phrase, but praise goes to Brandon Flowers, lead singer of The Killers, who wrote it as the opening line of the song “Flesh and Bone,” the first track on their 2012 album Battle Born.

Do you know this feeling, this white-knuckled state? It’s a mixture of fear and frustration, and it’s the damnable place where I find myself an embarrassing amount of the time.

On a raw April Saturday, when winter seemed liked it would never end, I wrestled (again/still) with this. Only a handful of things will rouse me out of this kind of winter funk: 1. a good run, 2. a gorgeous pair of shoes, or 3. a kitchen project. Since part of the cause of my malaise was a stress fracture of the second metatarsal on my left foot, 1 & 2 were off the table. Which left lots of room on the table for this: 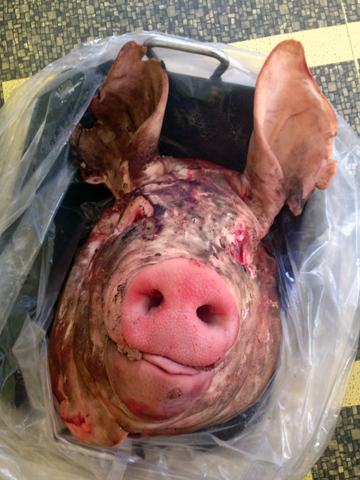 Yeah, I know. It’s a little creepy. But this head called to me. You see, I walked into Blackbird Farm’s freezer that Saturday, intent to load up on some ribs and ground beef. And then I asked, “So, what’s the weirdest thing you’ve got in here?”

“We’ve got some pig heads.”

If I tell you that, with the exception of the eyeballs and teeth, the head consisted entirely of flesh and bone will that make you feel better? I didn’t have to deal with brain or blood (although I am not opposed to cooking with brain or blood and I know people who do so with great skill), and with the exception of some whiskers, this pig head was pretty darn immaculate.

Now that the warm weather has arrived, the Blackbird Farm stand on Rt 7 is open for business daily, but even when the stand has closed for the winter, Ann Marie welcomes everyone to the farm proper on Saturdays. When she opens up that freezer door, it’s like entering a Narnia of meat. (Fair warning: I’m about to get a little preachy) Going to the farm also means that we, as consumers, get to meet our meat, so to speak. To get up close and personal with the food system. The animals are there, mooing and rooting and, often, napping. Ann Marie Bouthillette is our farmer; she and her family do the hard work every day that puts this food on our tables. In a world where we hear every day about the failure of industrial meat supply, I really like knowing that I have the option to patronize fine folks like the Bouthillettes. (Rant over.)

While I decided what project to pursue with my pig noggin, I stored it in our freezer. Jay, God bless him, has become so unfazed by finding things like this in our house. If he opens up the freezer to get ice cubes, for instance, and is greeted by a pig head sporting a devilish grin, he will simply shift the cranium aside, retrieve his ice cubes, return it to its original place without comment, and then continue (most likely) making a large cocktail.

The obvious project for a pig head is headcheese, but I already had made headcheese as one of the challenges in Charcutapalooza (granted, I only used jowls and trotters for that project, but it was delicious!).  We ate the heck outta that stuff in tamales. Let me tell you: headcheese tamales are good eatin’. Still, I needed a different challenge and doubted that I had the skills for a full-on porchetta di testa, so I settled on David Chang’s pig head torchon from the Momofuku cookbook.

Chang outlines the process with surgical precision in the book, so I’ll spare you many of the details. Just a suggestion, though: use a disposable razor instead of a torch to remove the whiskers. Singed pig facial hair smells so much worse than you think it will.

Simmering a pig head for four-plus hours introduces some obstacles, not the least of which involves owning a cooking vessel large enough to accommodate a swiny pate. My biggest vessel—a 20 quart lobster pot—fell short until I removed the ears. Insert Van Gogh joke here. Removing said head from pot at the end of cooking also presented a challenge. I ended up dropping it back into the pot, splashing my face (and much of the kitchen) in warm pig head broth. The cats enjoyed this turn of events as it delivered puddles of porky goodness onto the floor and they lapped away with gusto, unconcerned that I had just received a pig-head facial.

The journey from head to torchon goes pretty quickly: meat and fat gets seasoned and rolled up in skin and it all goes in the fridge to firm up.

Later in the week, I followed Chang’s recommendation to slice the torchon, coat the slices in flour-egg-panko, and deep fry. Yeah: hard to go wrong with breaded and deep fried pork fat, right? We’ve eaten this a couple of ways: with a lemony caper sauce over wilted arugula and with a mango-jalapeno salsa alongside some fresh tomatoes slathered in sizzling brown butter, and a salad of avocado and fresh mozzarella. The mango salsa iteration won that contest. But I’ve still got a mess of this in the freezer, so who knows what I’ll try next. I think it would be really yummy with a gribiche, as a riff on bacon and eggs. 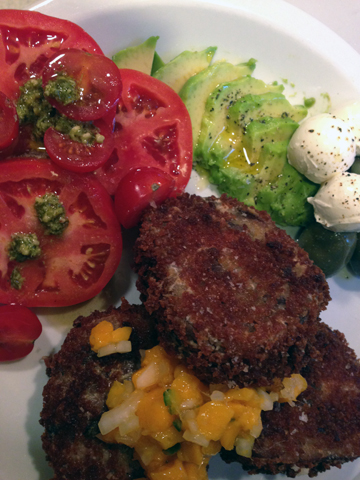 Did the pig head project cure my white-knuckledness? Yes, temporarily, and perhaps that’s all one can ever hope for. Later on in the song “Flesh and Bone,” Brandon Flowers asks, “What are you made of?” The answer, of course, is flesh and bone, but so much more: spirit, and experience, and grit, and willingness (maybe) to be OK with the fear. And perhaps the process of turning a scary pig head into a great meal is a good place to start.

Post script: Mid-way through the project, I took a break to meet my super-cool friend Bryna for dinner. After giving me a big hug (Bryna give awesome hugs), she said, “Your skin looks fantastic! Did you do something special?” So, friends, I am hereby staking my claim to the pig-head facial as the new fountain of youth. You heard it here first.

Here’s the song that got me thinking.