Eating Out of the Box: A Non-Meh Tartine

There comes a time each season, generally quite close to the end, where I lose focus and motivation—where “meh” becomes my modus operandi. It stems, I am sure, from my own disappointment that I haven’t worked hard enough or smart enough to take advantage of all that the season had to offer. That I haven’t sucked the marrow out of the last three months. That my gusto has morphed into gust-no. Let me tell you, friends, I am there now. I am so fully inhabiting the “meh” zone that I am thinking about running for “meh” mayor. The field is pretty open and I imagine I stand a good chance.

Anyway, when the box arrived, I peered inside and said, “Meh. I’ll just make a f***ing salad.” 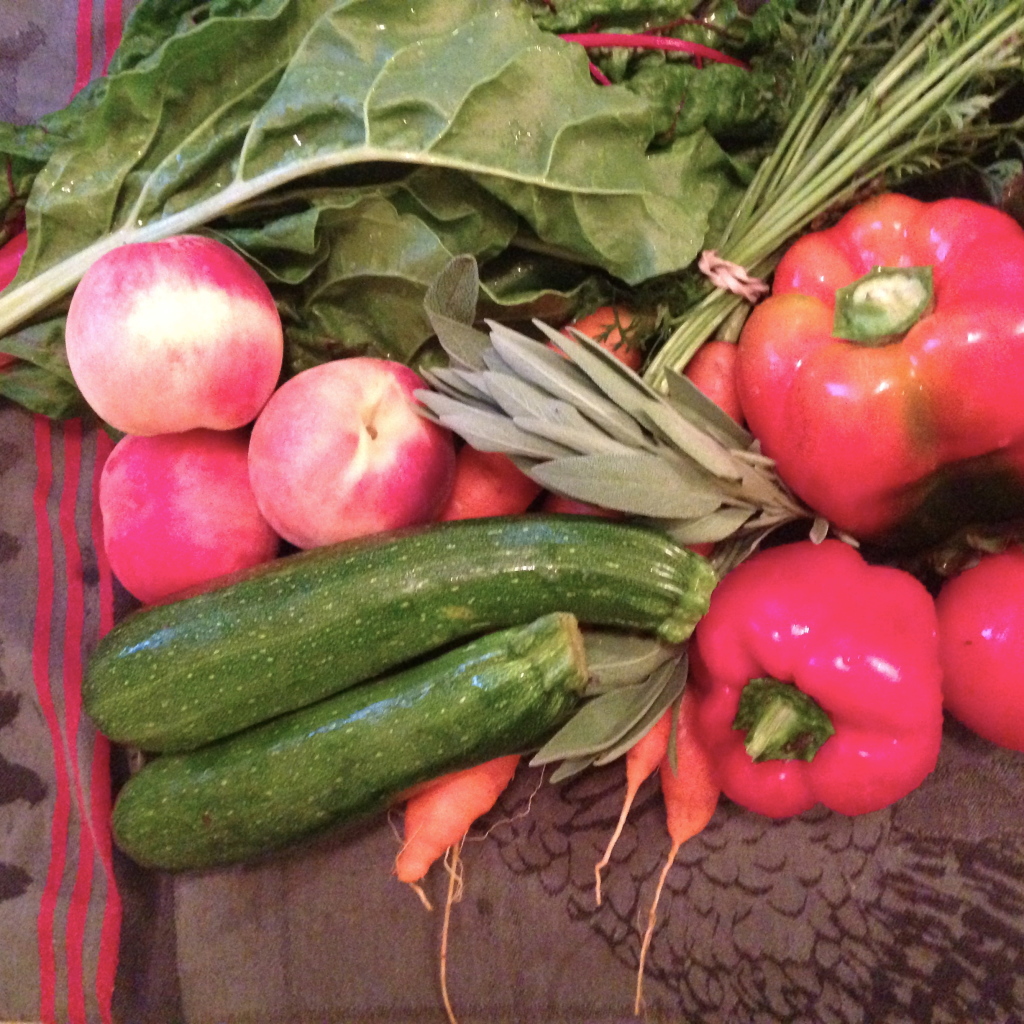 But, looking again at this fantastic haul and experiencing some well-entrenched Catholic guilt about saying the F-word in front of the impressionable produce, I decided to get to work.

I thinly sliced the zucchini on the mandoline, skewered it with prosciutto, then lightly grilled and served with a zippy (and not shown) salsa verde. 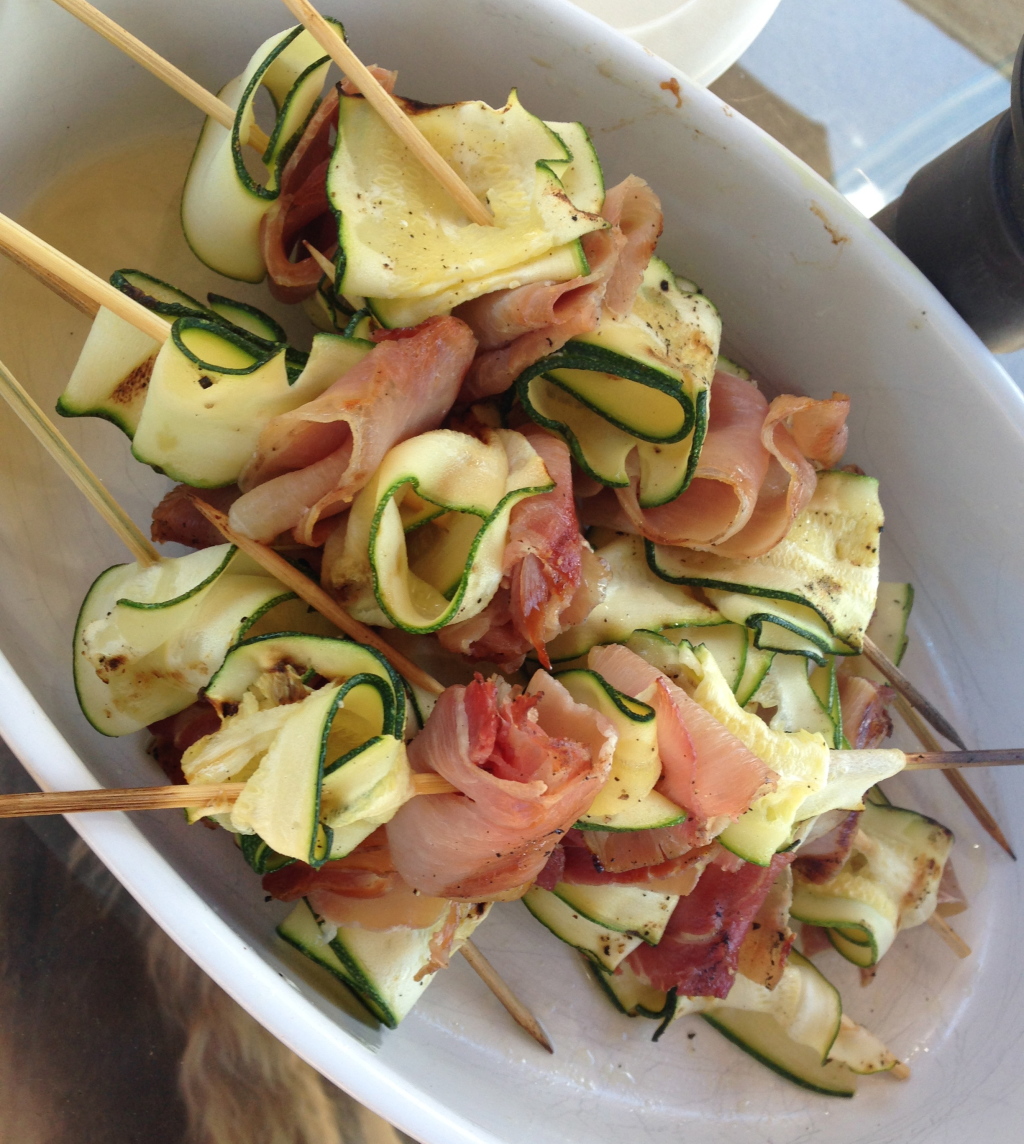 I roasted the peppers and combined them with the tomatoes (along with onions, garlic, smoked paprika, and a few other things) to make a pipérade basquaise, into which I plopped a couple of eggs. 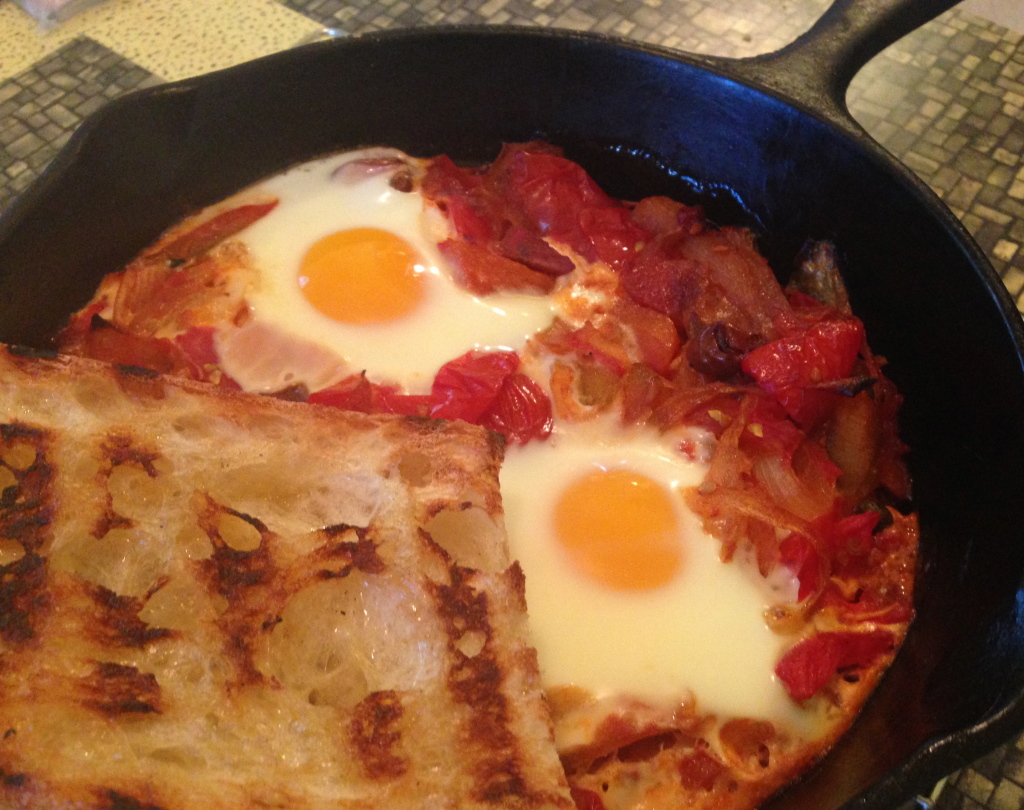 I used the chard as the bitter equalizer and middle layer in a stack of sweet corn biscuits and salty fried chicken. 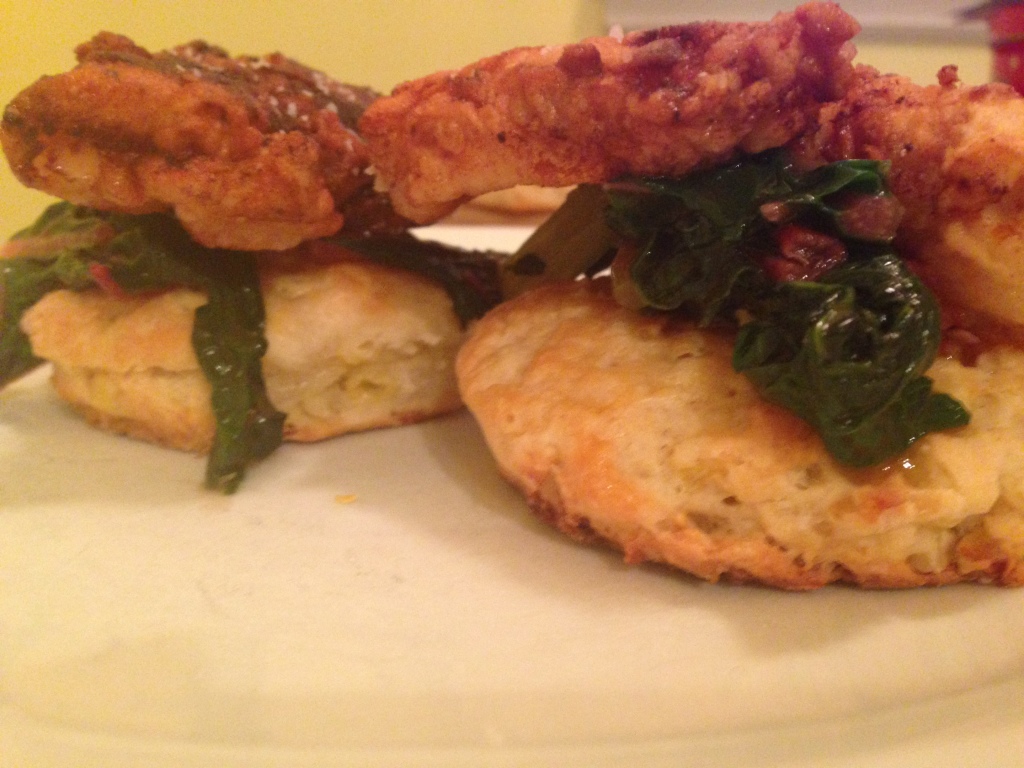 The sage enlivened a compound brown butter that tastes pretty damn good on both steaks and sweet potatoes. 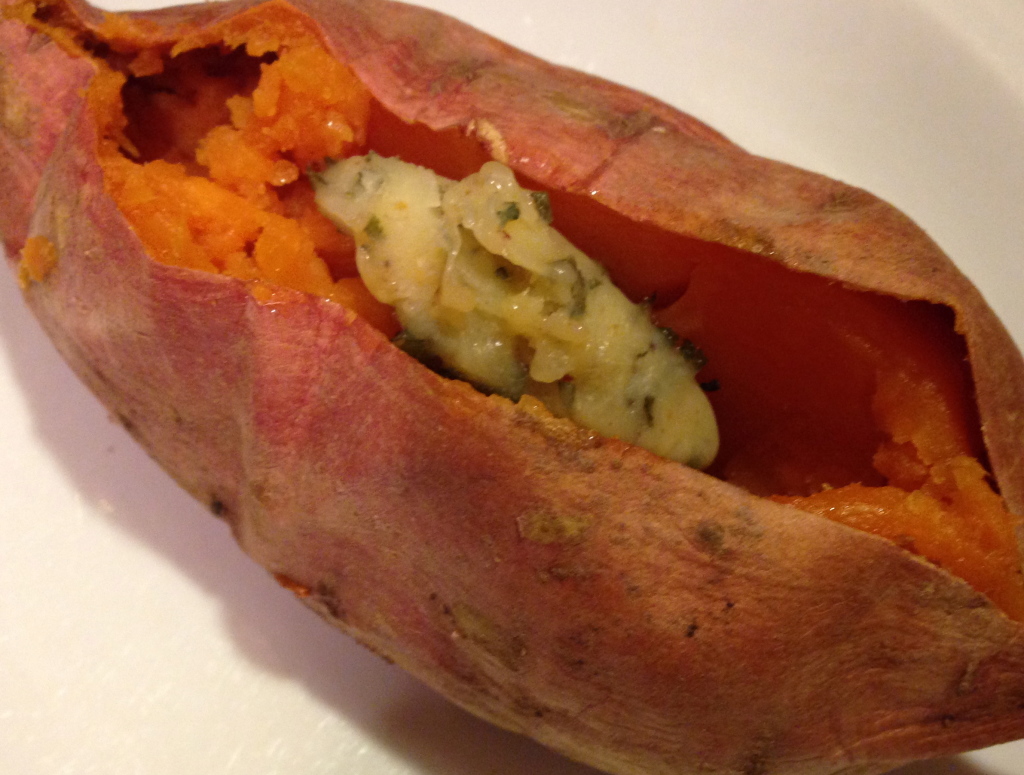 The peaches I grilled, and served alongside a freshly churned strawberry-passion fruit sorbet. 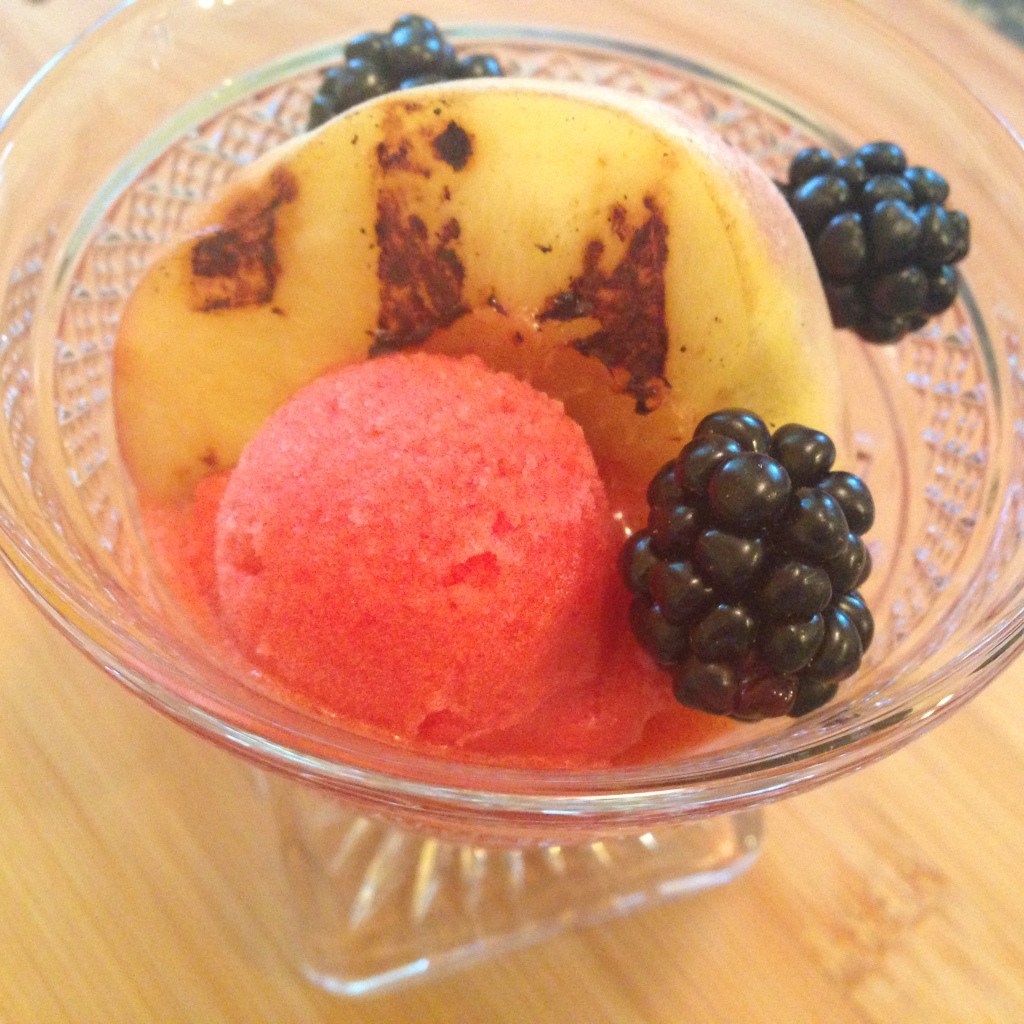 But the carrots were the star of the basket: center stage in a very unassuming tartine. Seven Stars wheat bread, toasted; carrot top pesto; roasted carrots; Twig Farm Tomme, olive oil, S&P. Granted, anything that contains cheese from Twig is going to sing (seriously: do whatever you need to do to BUY THEIR CHEESE. If you do not spontaneously emit groans of pleasure while eating it, I will personally refund your money), but this thing was insanely good. Stealth good, if you know what I mean. You’ll look at it and say to yourself, “How can this possibly taste good? It’s bread with a carrot on it.” But heed my words: Do not listen to yourself. Just take a bite. And then another. And then give the full-mouthed, slow head nod of approval. Point to your mouth for emphasis. 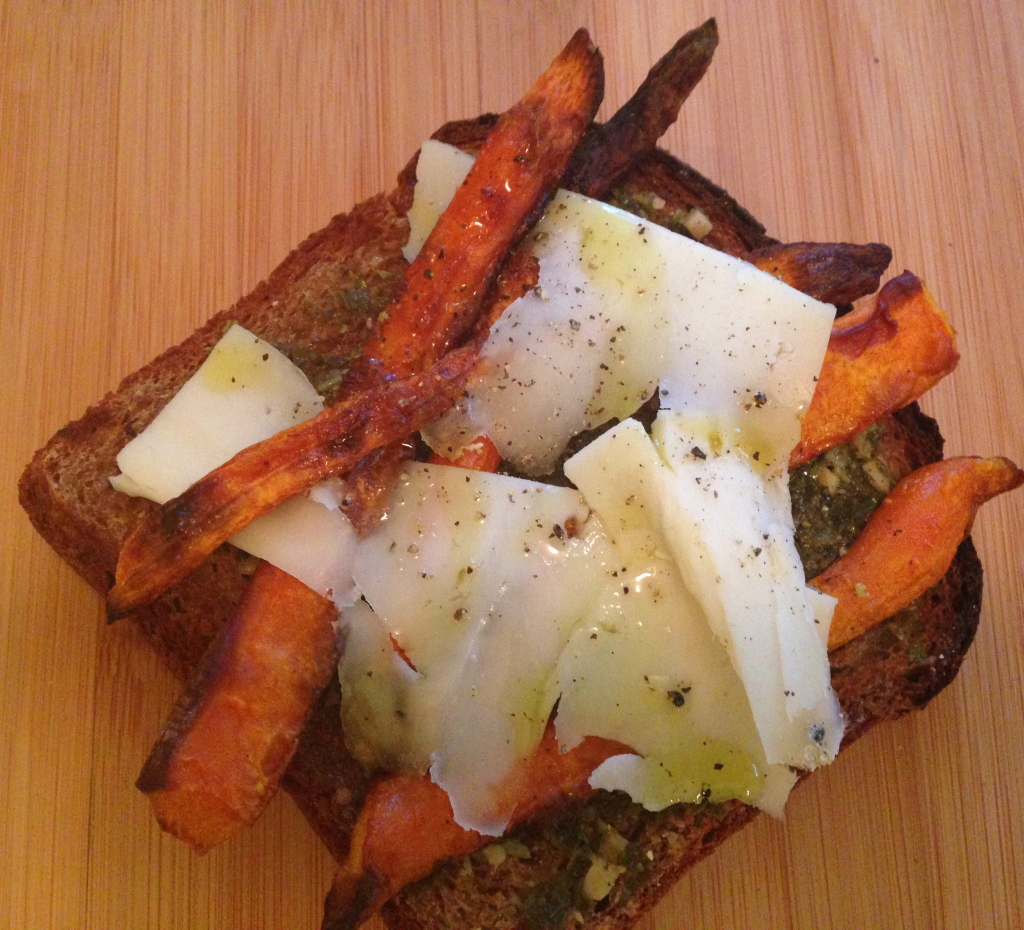 And the lettuce? I made a f***ing salad. 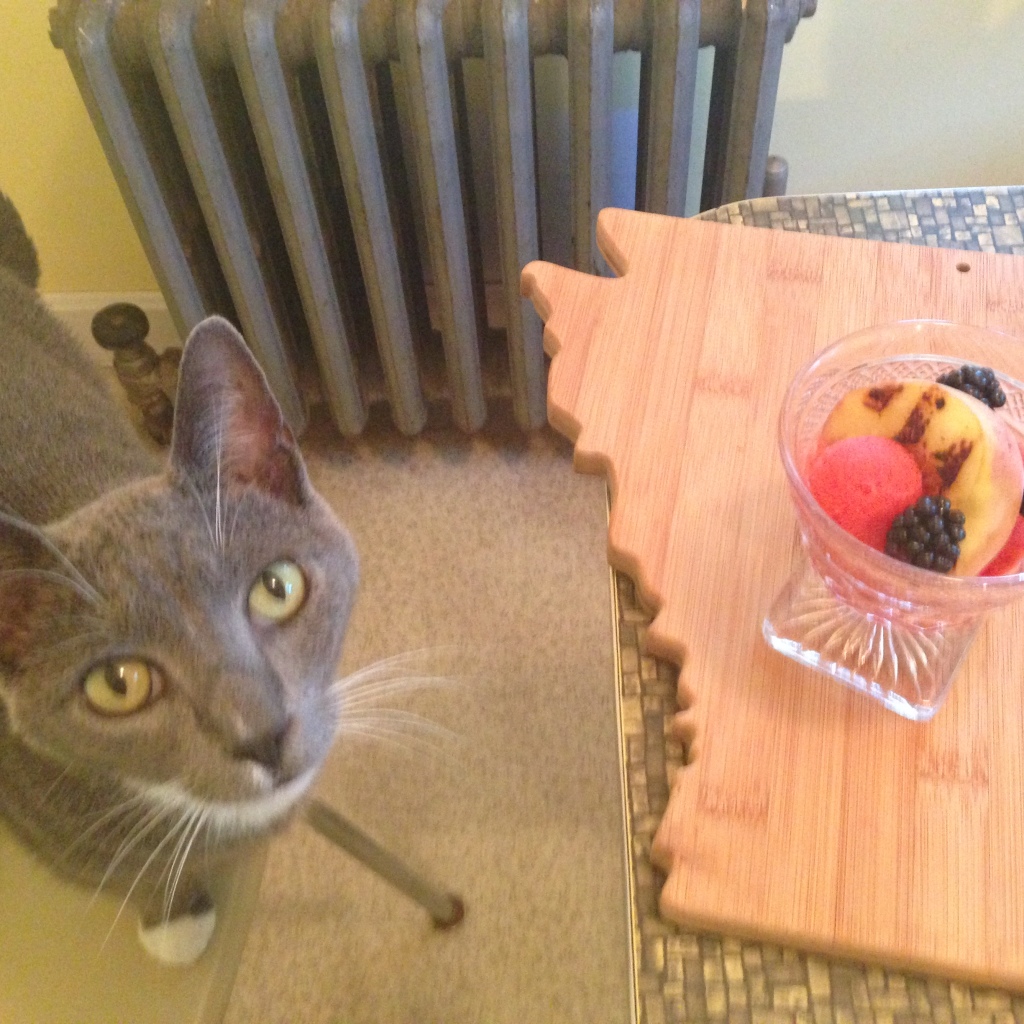 My acolyte and helper!

This entry was posted in Uncategorized. Bookmark the permalink.