I Lamb What I Lamb

A few years ago I took at class on beef butchery at the Culinary Institute of America in Hyde Park, NY. It was very cool. And by cool, I mean downright cold because the class took place in what (I assume) is essentially a meat locker for the CIA. My fellow classmates and I had to wear hard hats to shield our noggins from the suspended sides of beef, and our chef instructor—who had grown up in a family of butchers on the Lower East Side of Manhattan—encouraged us to use the hot plate at our disposal to cook up bits we hacked off the cow so we could gain an appreciation of the tastes and textures of the different muscles. So, even though I spent most of the time shivering and I ended up with a very unattractive case of (hard) hat head, I learned a lot. I also put a healthy bit of fear into my husband, because, you know, I can butcher.

Fast forward to last year when Chef Matthew Jennings hosted a dinner at his drop-dead-awesome restaurant Farmstead for Chef/butcher extrodinaire Ryan Farr. Chef Farr owns 4505 Meats in San Francisco (and concocts a chili dog with homemade fritos that is so transcendent it will make you question your own worthiness to stand in the man’s presence) and authored the I Ching of cutting up animals, Whole Beast Butchery. That night, he broke down a 350-lb pig in under an hour, carefully explaining each cut along the way. His demo and his demeanor inspired me.

Fast forward (again) to last month, when I took a lamb butchery class with Michael Dulock of M.F. Dulock through Formaggio Kitchen in Cambridge. Again: nuanced approach to the animal, no waste, and extreme respect. I left with more inspiration and an itching for some action.

Here’s my dilemma: a cow is really big. A pig is pretty darn big, too. I don’t have a workspace large enough nor a freezer with enough capacity to deal with a cow or a pig. But a lamb? A lamb I could probably handle. A half-lamb I could definitely handle. What? 30 lbs? My purse weighs more than that most days.

The fine folks at Persimmon Provisions procured a gorgeous lamb half for me (delivered on Valentine’s Day, no less! Because, really: what says “I love you” more than a half carcass?), and handed it over the counter to me in a black plastic garbage bag. I loaded it in the back of the MINI and prayed that I wouldn’t get stopped by the cops (“Honest, Officer, I have this garbage-bagged carcass in my car for entirely SALUBRIOUS reasons.”). 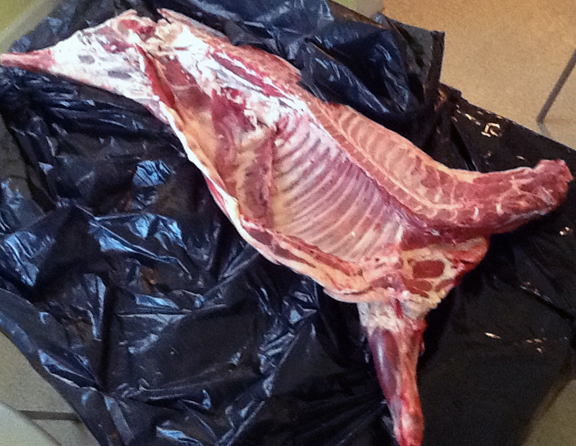 The lamb and I arrived home. I gathered my tools and set him up on the kitchen table. (Jay came downstairs in the middle of all this—I had neglected to tell him about my planned activities—stopped short, said “Oh my God,” and high-tailed it outta there. He came back moments later and begged me not to use the cleaver unless he could be around to ensure I didn’t lose a digit.) With some help from my reluctant husband using the hack saw, I spent the next two hours breaking the carcass down into primals: neck, shoulder and foreshank, rack, loin, leg, with Ryan Farr’s glorious tome guiding me every step along the way. 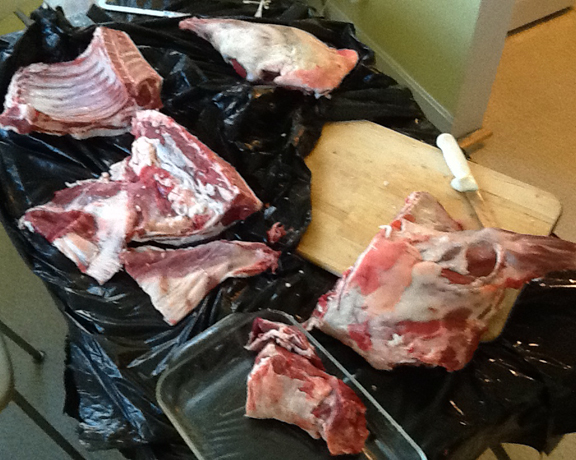 I boned out the ribs and backbone from the rack, leaving the belly attached, for a lambchetta—the lamby version of a porchetta. I scored the interior, rubbed it up with a healthy schmear of rosemary, garlic, parsley, olive oil, S&P, rolled it up nice-n-tight (abeit with a rotten tying job—more work needed here, obviously). 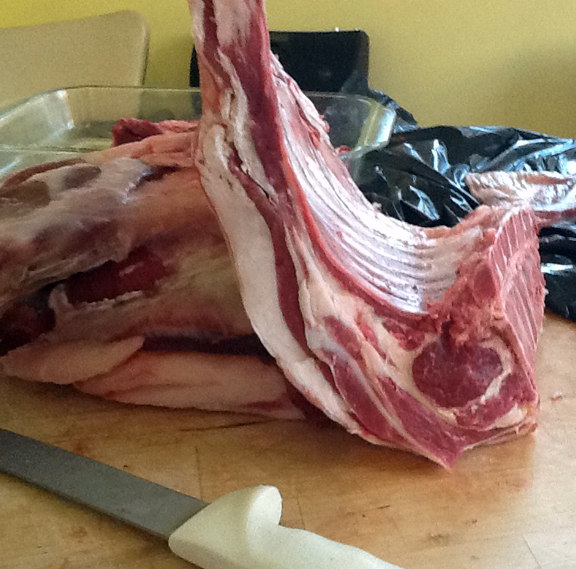 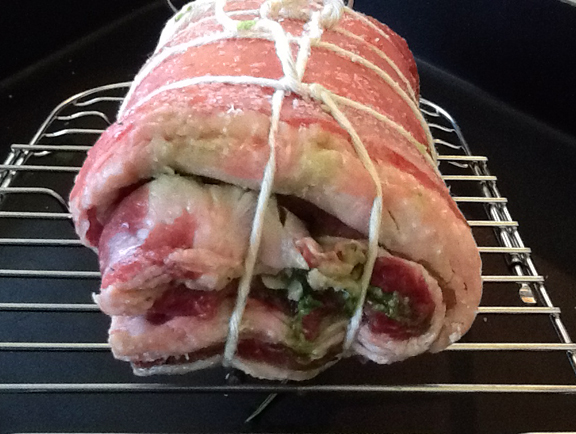 Loin, wrapped in belly, tied as if by a pre-schooler.

Seared the hell outta the outside and then roasted it very low (275) for a couple of hours to an internal temperature of 135. Gorgeous, right? 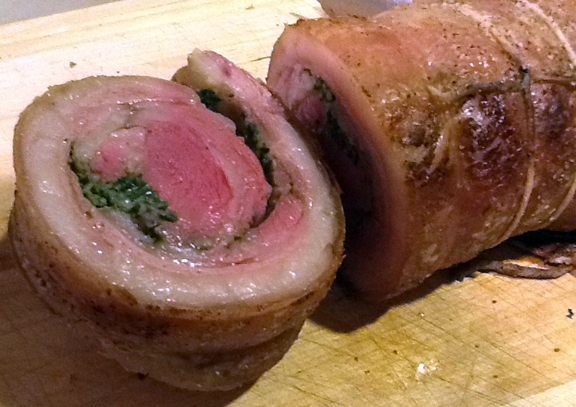 We ate this bad boy sliced on ciabatta with some roasted red pepper aoli and potato chips fried in duck fat. Many times that evening, I said to Jay, “Can we just talk for another minute about how freaking amazing that lamb was?” I also reminded him that he should still be a teensy bit a-scared of me, ’cause I’m taking this butcher-thing to the next level. 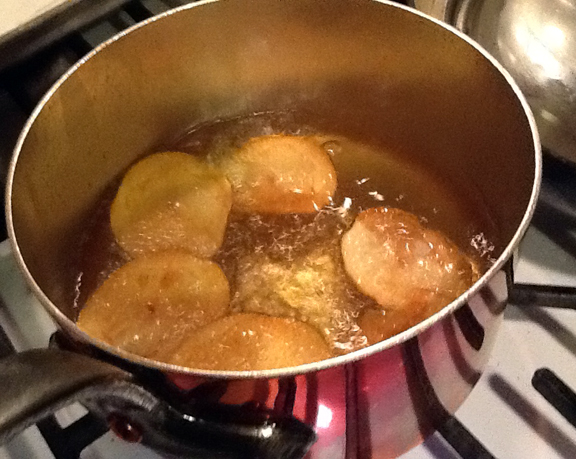 Thanks so much to Matthew Jennings, Ryan Farr, Michael Dulock, and Champe Speidel, who collectively served as my Yoda, my Obi-Wan, my Qui-Gon Jinn, and my Han Solo as I worked my way through my first four-legged animal (even though I only had two legs of it).

What’s a good butchery soundtrack? Beats me, but I listened to the new Matt Pond album, “The Lives Inside the Lines in Your Hands,” twice while I worked. It’s delightful, and features MP’s signature reedy voice and extended use of a metaphor (hands, nature, rivers). Give it a listen if you need to cut up a lamb, or even if you don’t.