First off, I thank all of you who expressed so much concern for the cats and me after the last post. I have been overwhelmed with words, prayers, and gestures of kindness. I always prided myself on my choice of friends, but, DAMN, did I ever hit the jackpot with you people. You rock in the most profound way and I am very grateful.

Both cats are home and on the mend. Chet has a feeding tube which, thankfully, we haven’t had to use for food yet, as he has eaten pretty robustly on his own, and Whiskey is relegated to wearing the cone of shame several hours a day to ensure that she doesn’t scratch herself silly in an allergic fit. For a week, they were both on daily pain medication, so it was a bit like living with Cheech and Chong. 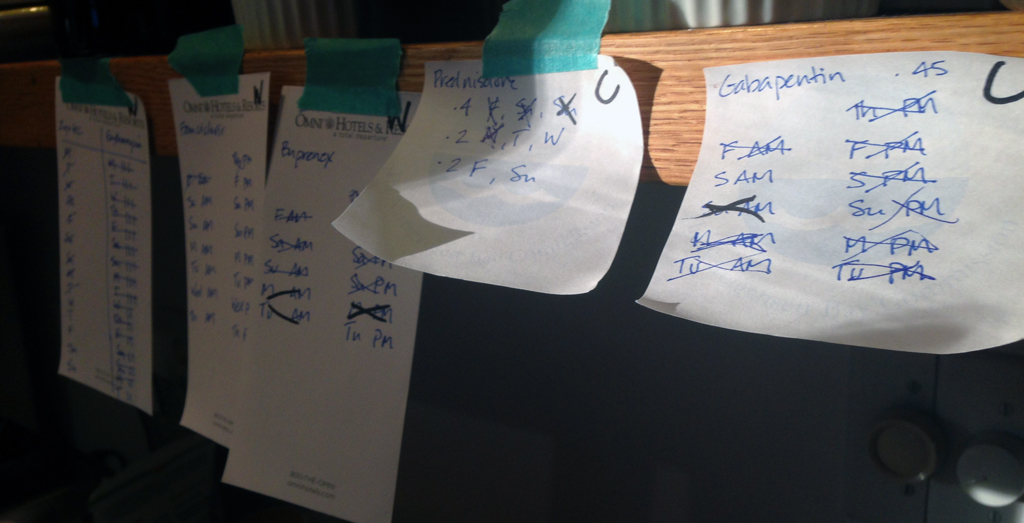 My less-than-fancy medication checklists. I probably should have made an Excel spreadsheet.

The Unit’s situation in Greece has stabilized as well, thanks to some hand-waving by the ECB and the Greek Parliament, so with any luck, he’ll be back in the States before any other crises hit.

And while we had some ups and downs with the felines being home from the hospital (almost entirely caused by my own tendency to freak out), I approached this week’s vegetable box with a slightly lighter attitude. 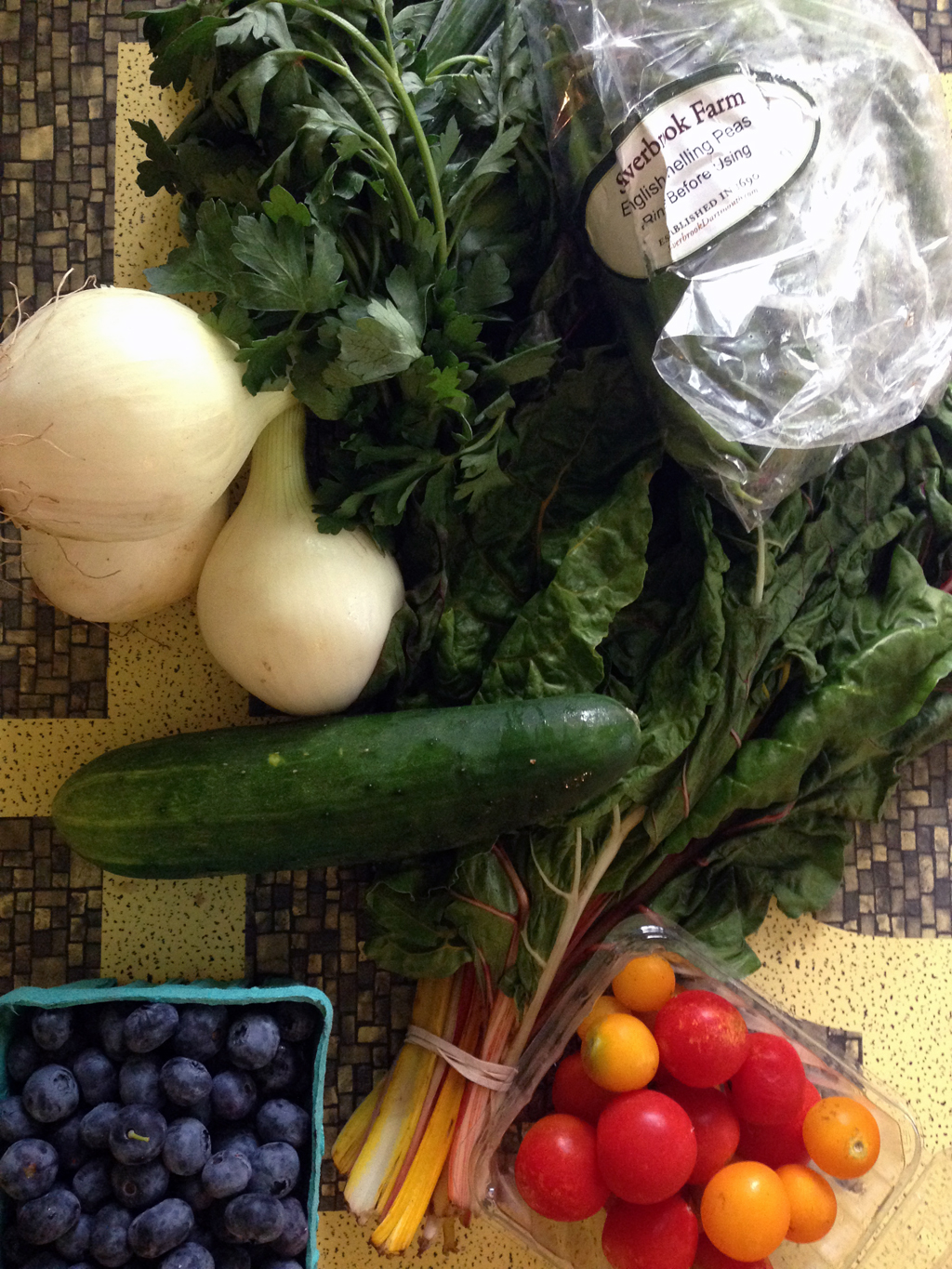 And here’s what happened:

The cucumber joined a green apple, a carrot, a lime, and a handful of mint in a pretty darn healthy glass of juice. 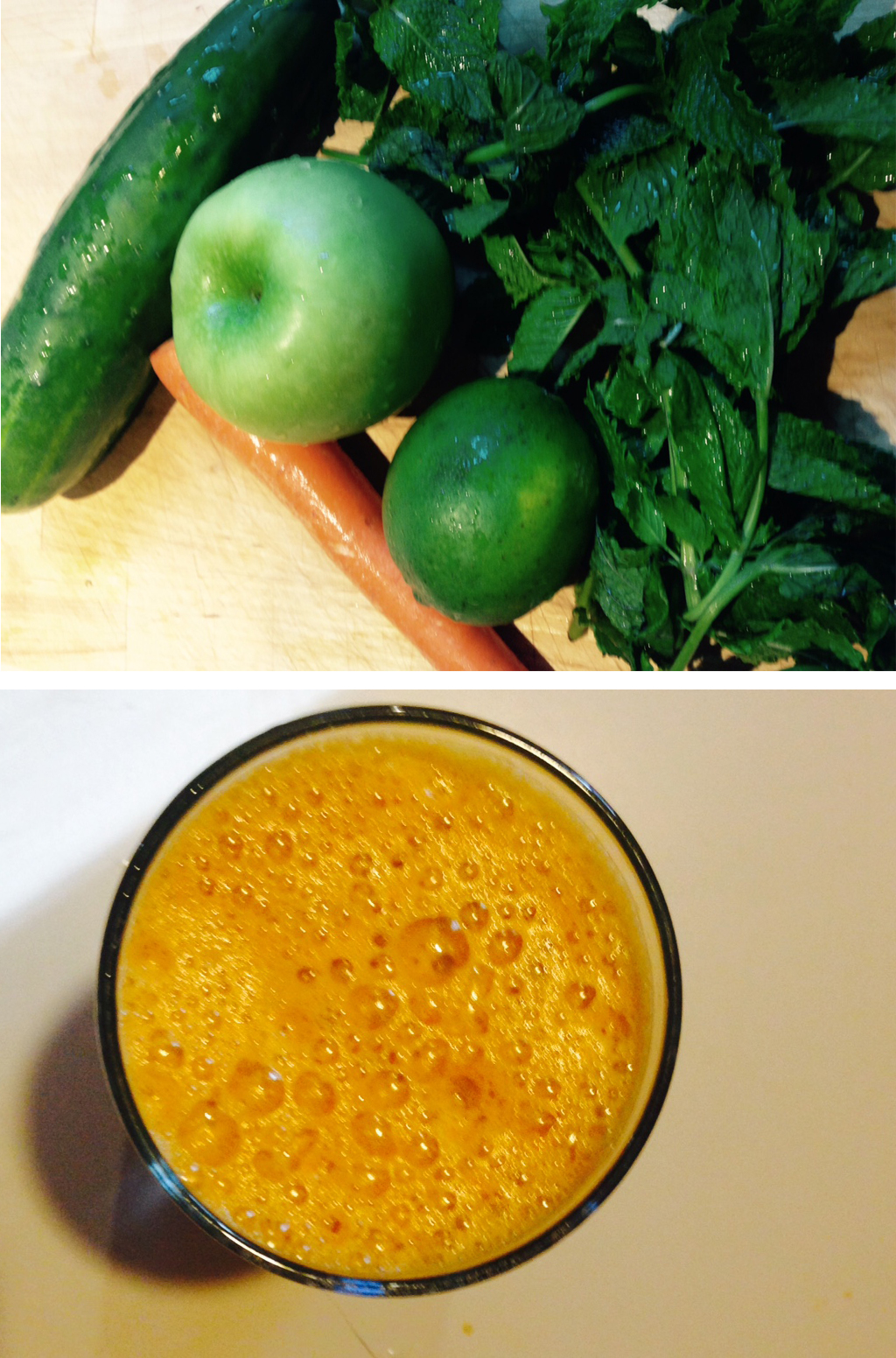 A much oranger juice than expected, considering I only used one carrot.

After two weeks of consistently forgoing dinner (it’s funny how stress will make you think that a whisky—or two—and a handful of peanuts is an acceptable dinner), I decided to cook a proper meal for myself, using the fresh peas, onion, and parsley for a vibrant soup, topped with some minted yogurt and a pink shrimp. 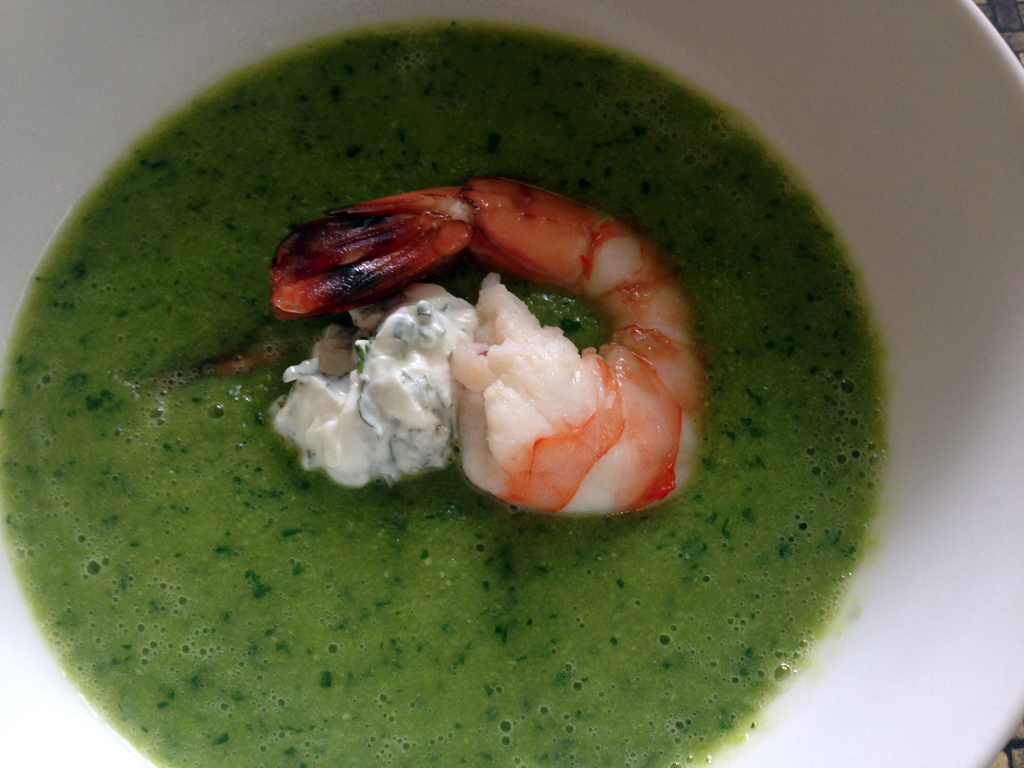 The chard joined a couple of eggs for a “desperation dinner” after a particularly tough workout (by the way, have you tried GRIT yet?). After this photo was snapped, I added what was probably an inadvisable amount and multicultural combination of hot sauces. 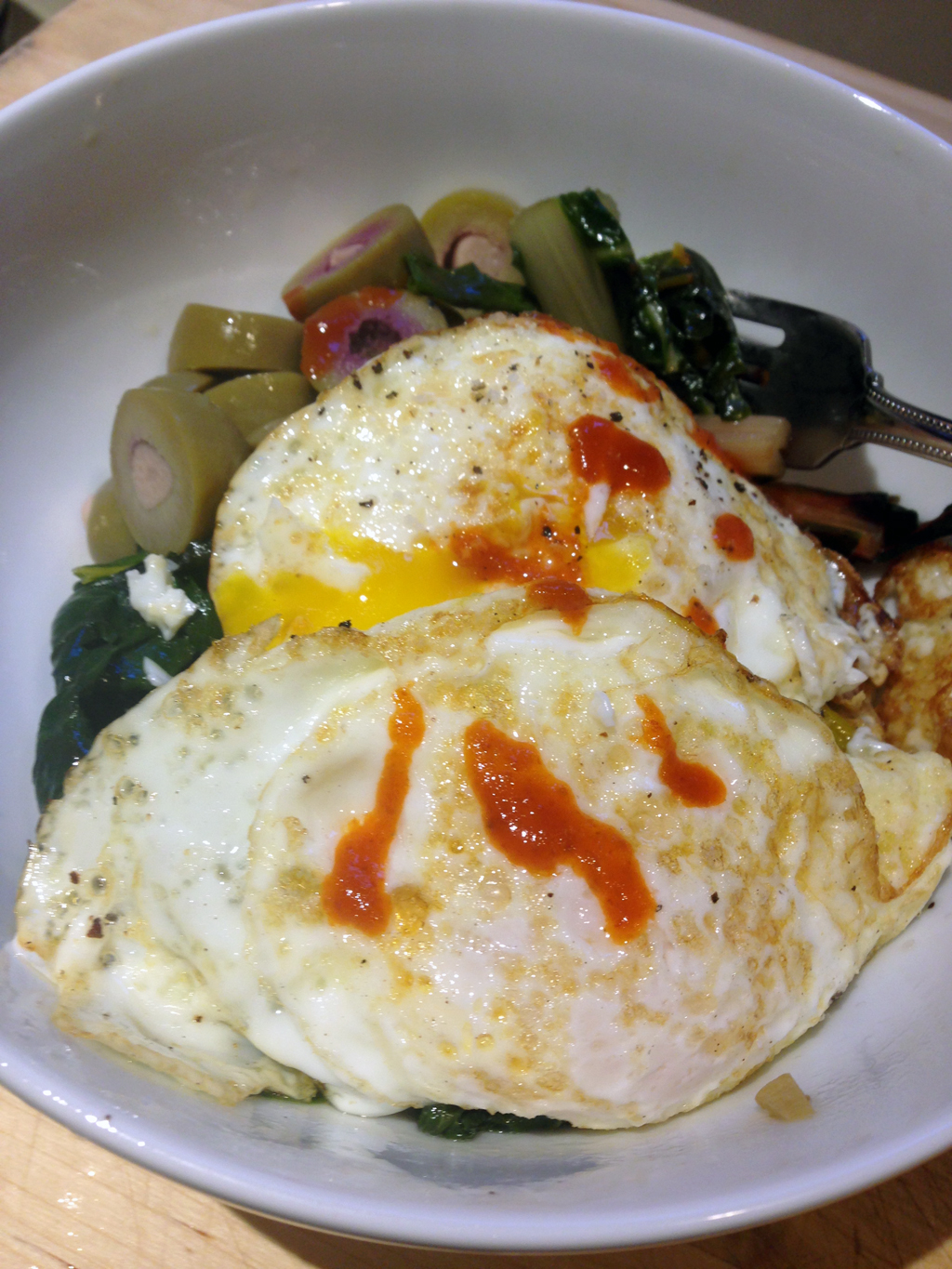 The tomatoes and parsley garnished a couple of cast iron skillet focaccias (or is it focacciae?). I used the no-knead method on Serious Eats. It works like a dream every time. 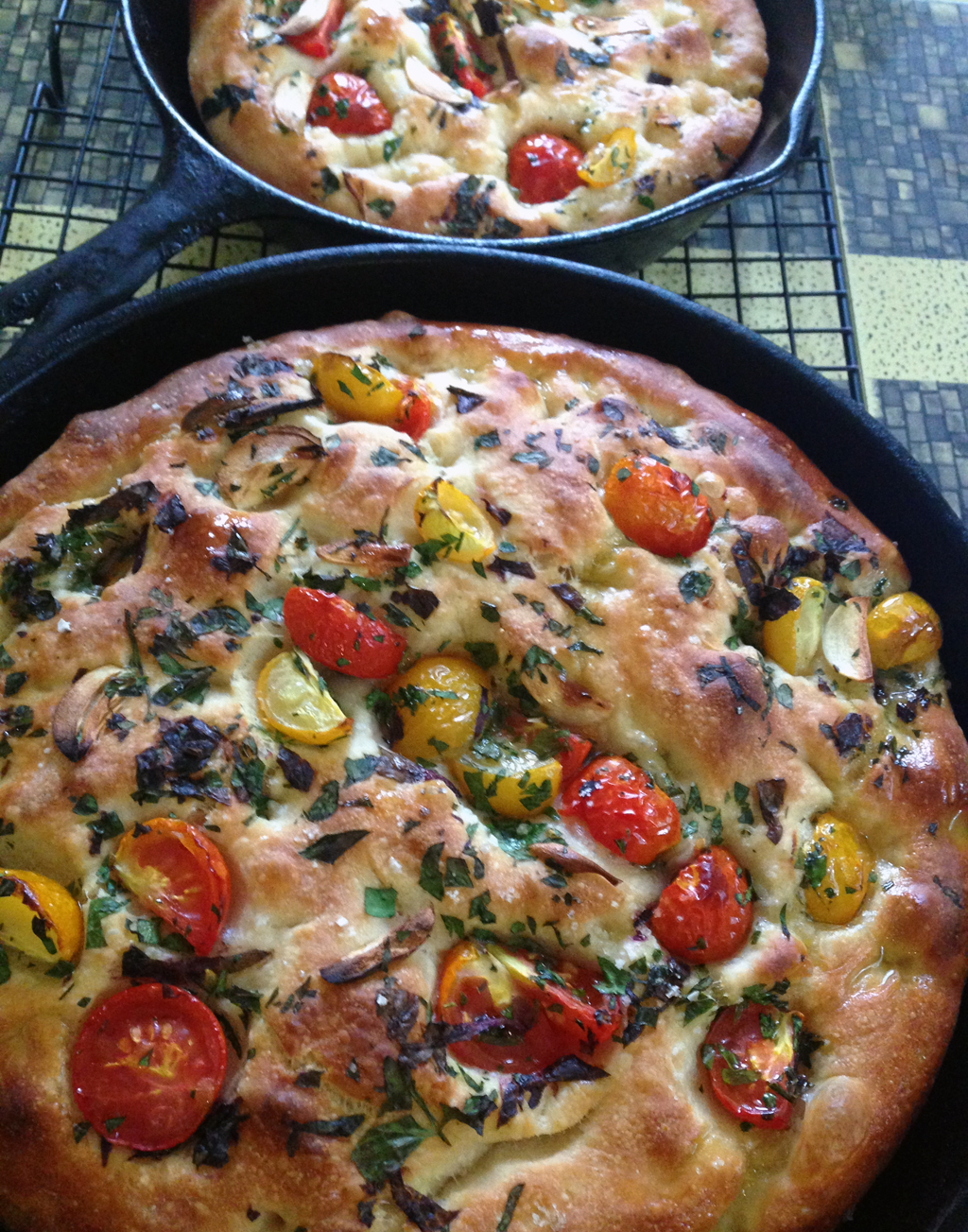 And the blueberries became jam, because jam and toast are my favorite foods in the world, and if I could live off crusty bread, acidic jam, and whisky for the rest of my life, I would be a happy lady. Half of this blueberry jam I spiked with St. George’s Botanical Gin; the rest got a stiff shot of lemon. 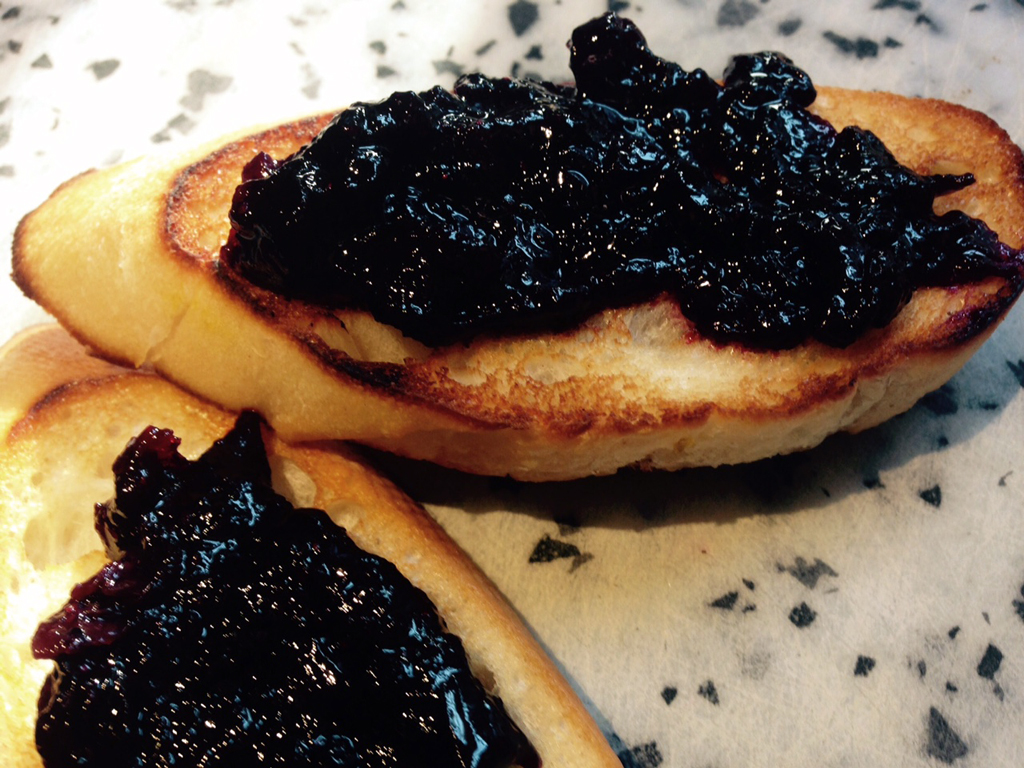 Jam on buttered toast. Is there anything better?

Over the past two weeks, I’ve listened extensively to Lost on the River by the New Basement Tapes. The T. Bone Burnett-produced album came out last fall and features Elvis Costello, Riannon Giddens (of the Carolina Chocolate Drops), Taylor Goldsmith (Dawes), Jim James (My Morning Jacket), and Marcus Mumford (Mumford & Sons) as a supergroup of sorts performing a series of tracks based on recently discovered lyrics handwritten by Bob Dylan, most likely in 1967. Undiscovered handwritten Dylan lyrics? It sounds like something out of a novel or a movie, right?

This record is a gem, and the performances, across the board, amaze me. This track, in particular, is delicate and beguiling, with a weary melancholy that enhances Mumford’s jugular-scratched voice. Fun fact: Costello couldn’t make it to the video taping below, so Johnny Depp (yes: that Johnny Depp) sat in for Elvis on guitar.