Last November, I declared the oncoming season “The Winter of the Knish.” Little did I comprehend at that time how seriously this knish-worthy winter would kick my tuchis: the coldest February on record and ungodly amounts of snow have rendered any outdoor activity, with the possible exception of shoveling  (So. Much. Shoveling.), nigh on impossible. Keeping our old drafty house warm challenges our middle-aged boiler. Even the cats burrow under the bedcovers or hop into any available lap to ward off the chill. 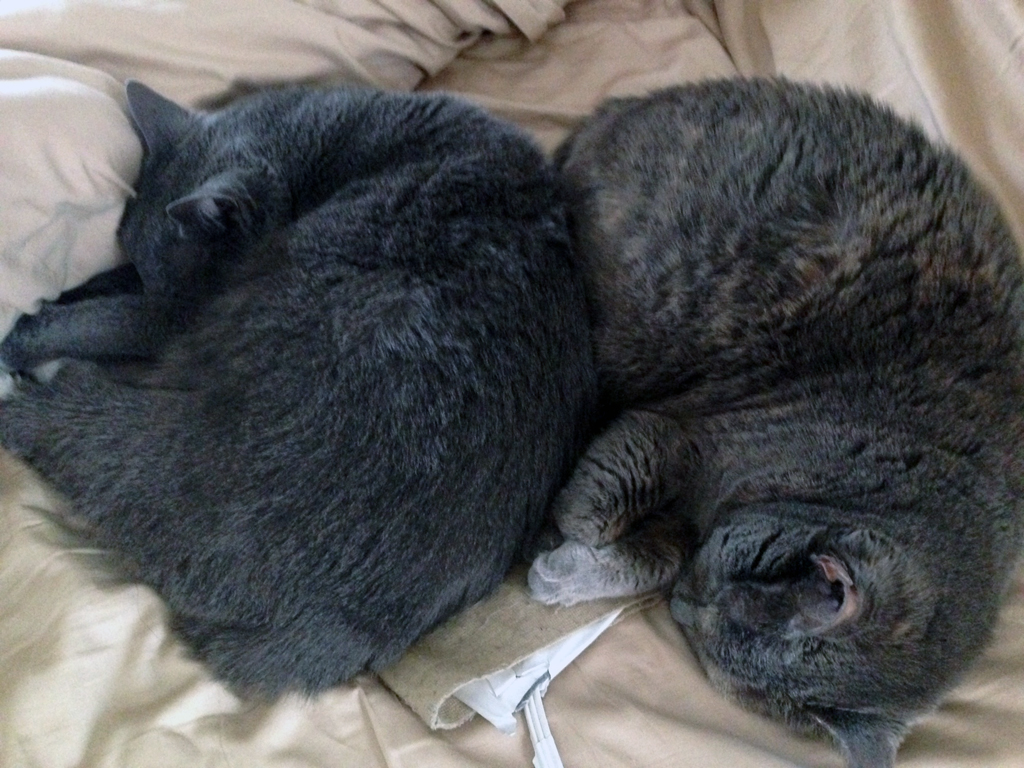 Leave a bed unmade for five minutes and this happens.

So, yeah: knish just got real.

A knish doesn’t just fill the belly. It fills the soul. It brings together nuggets of slowly caramelized onions, robust chunks of potato, and anything else you crave, snuggled in a blanket of savory pastry. It’s the Snuggie® of the food world. Eat a knish and plop yourself on the sofa in front of endless episodes of Dr. Who*; soon you will cease to concern yourself whether or not spring will ever arrive. As my friend Nina explains, “A knish is a hand-held mashed potato delivery system. What’s not to love?”

*Full disclosure: I still like the Ninth Doctor the best. 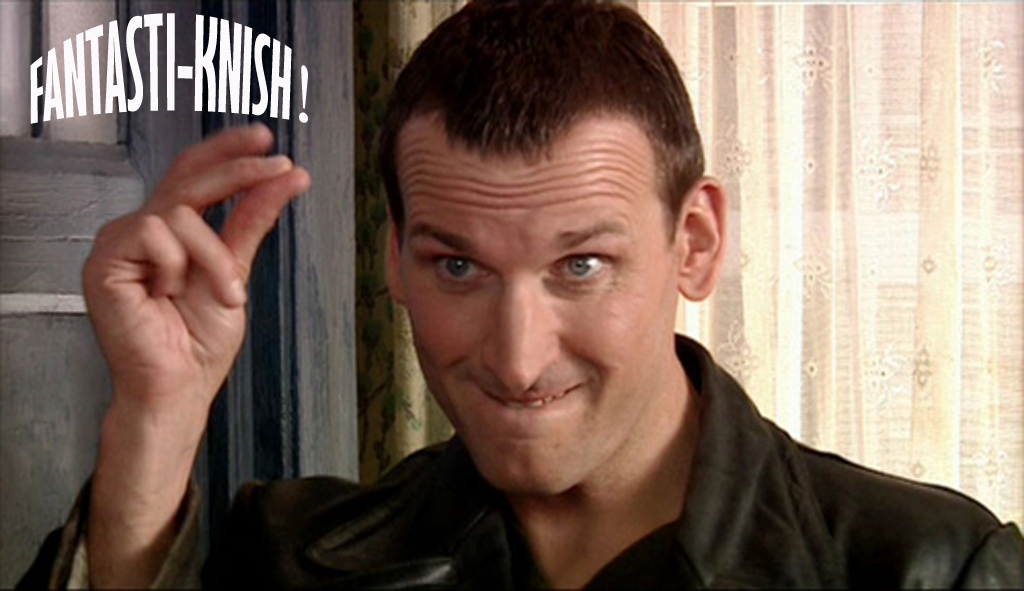 I would be willing to bet that the Doctor would have enjoyed the odd knish or two.

I used the better part of two snowy days to do some deep knish exploration. The dough is a dream to work with: fatty and pliable; the caramelized onions and mashed potatoes fill the house with an aroma that holds forth a umami promise. Plus, I considered the activity as housekeeping: my knish-making gave me the opportunity to use up lots of bits of stuff taking up space in the fridge and freezer.

Smoked pork belly, bacon-braised collards (left over from an attempt to recreate a meal I had last month at Sean Brock’s restaurant Husk in Charleston, S.C.): 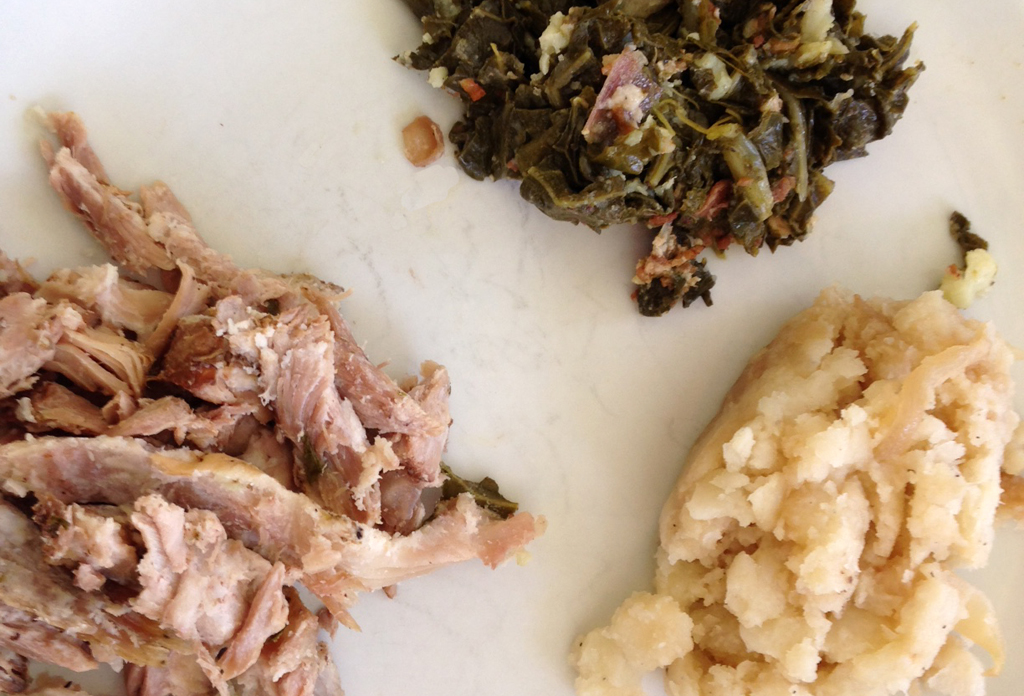 Braised veal breast (dug out of the freezer, a remnant of our Christmas dinner), braised cabbage, and sautéed mushrooms: 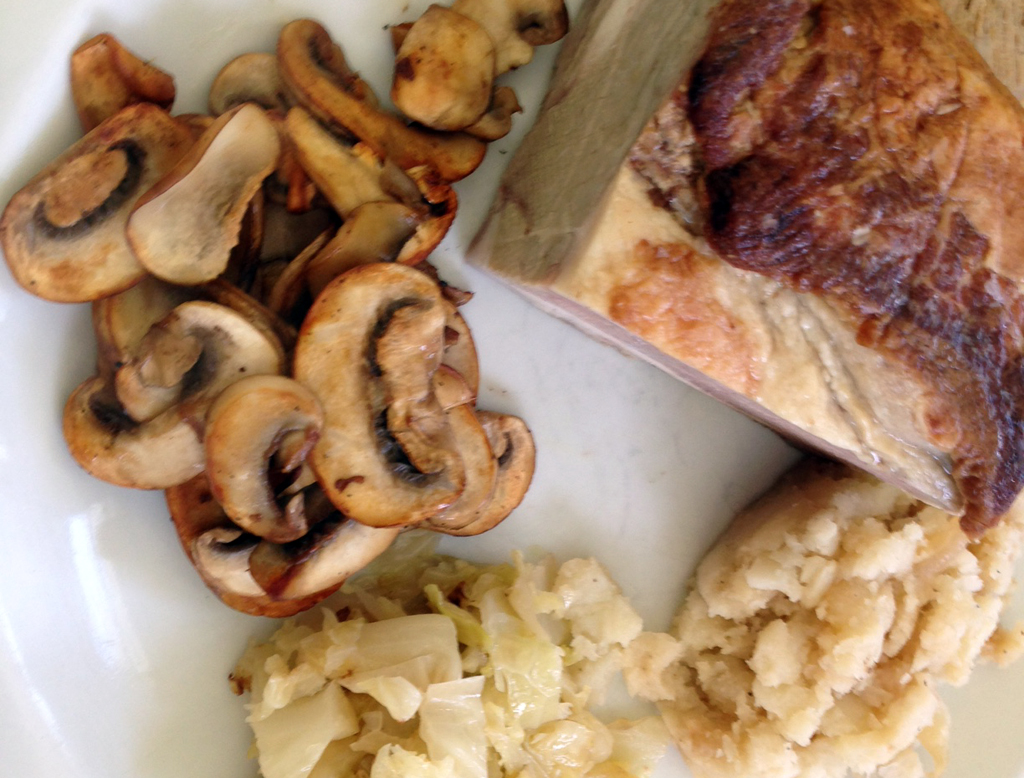 I also made some with braised lamb shank meat (the result of an experiment with my combo pressure cooker-slow cooker) and roasted carrot, but I forgot to take a picture of the filling. 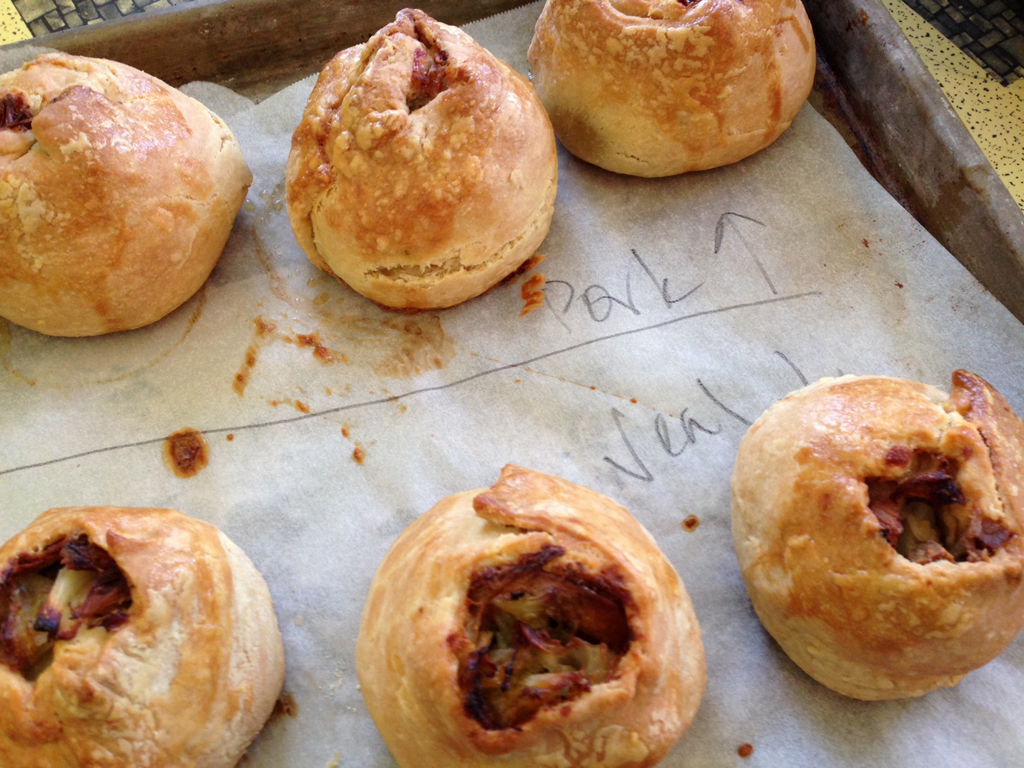 Not the prettiest knishes, but freshly baked.

Did I mention I made about a million of these over two snowy days? Did I also mention that I tried, with as much delicacy as possible, to foist knishes off on anyone whom I thought might be remotely interested? Do you know how hard it is, in these carb-eschewing times, to find a good home for a knish?

With an abundance of knishes, and since I’m the type who likes to take advantage of guests in my home, I served many of these dumplings to the lovely ladies from my book club on an evening in which we discussed the new Nick Hornby novel, Funny Girl. (NB: I liked but did not love the book, but I still love Nick Hornby.) I think there’s something badass about a woman who can throw down on a knish. 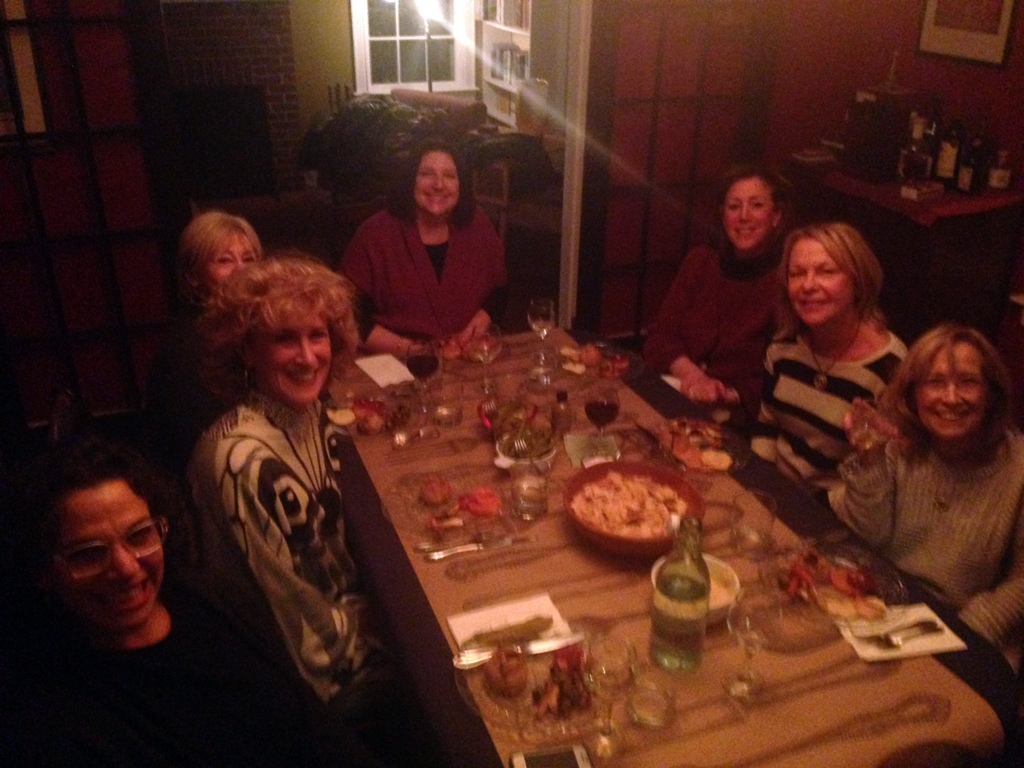 The Very Fine Ladies of Book Club, ready to dish on some knishes.

The star comestible of the evening, though, was this delightful Furmint, a great balance of acidity, fruit, spice, and minerality, and an excellent value at under $15 a bottle. It stood up well to the richness of the knishes, but I imagine it would also do well with sushi. 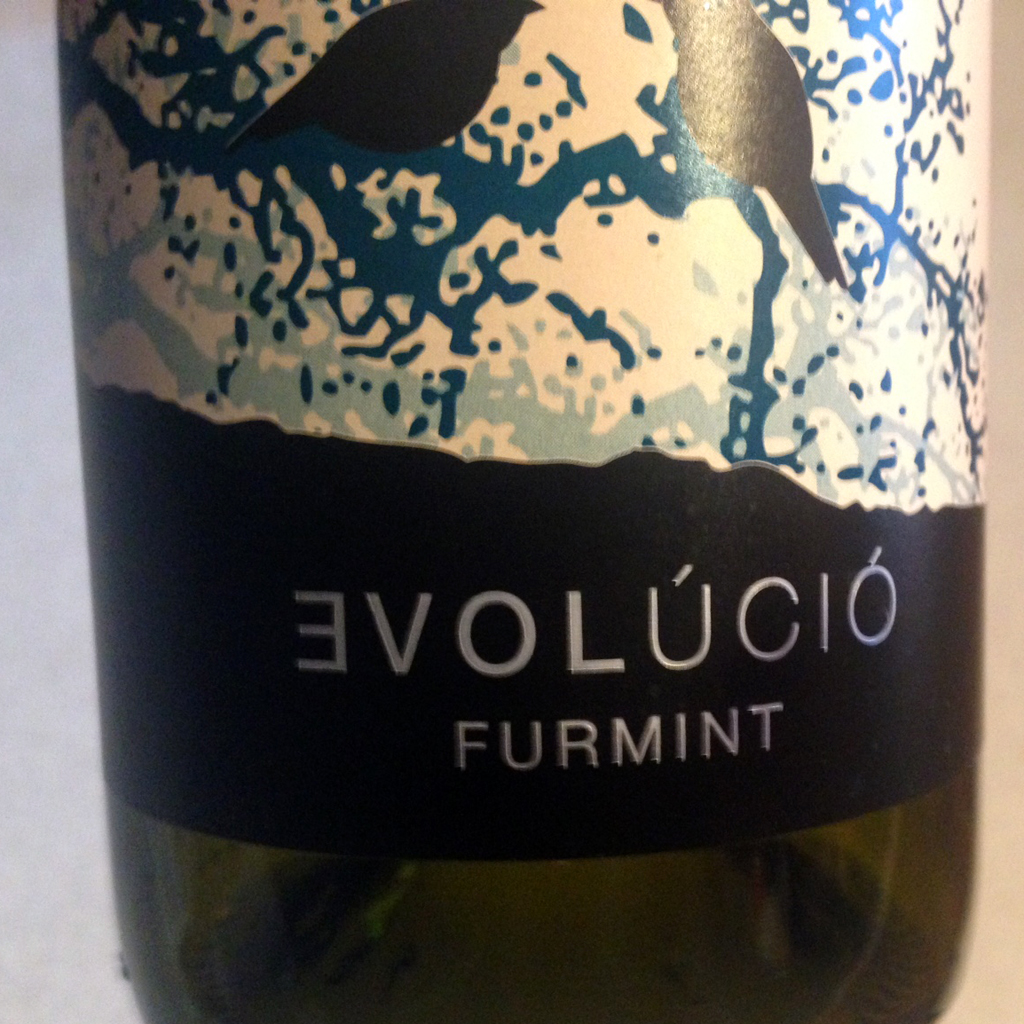 4 Responses to Knish Just Got Real